It took one compliment, just one, from a family friend with exquisite taste in clothing to admire my gray silk butterfly top; and off I went in a hurry — to make more butterfly tops.  Mind you, I’ve previously considered this top to be quite ordinary (and quite passe, stylewise), just something to wear when other, better things are in the laundry.

Ok, I made this chiffon number, too. But the fabric and “hanging” seams are the star of the show. I was done with this style.  Read about it in this previous post, if you will. 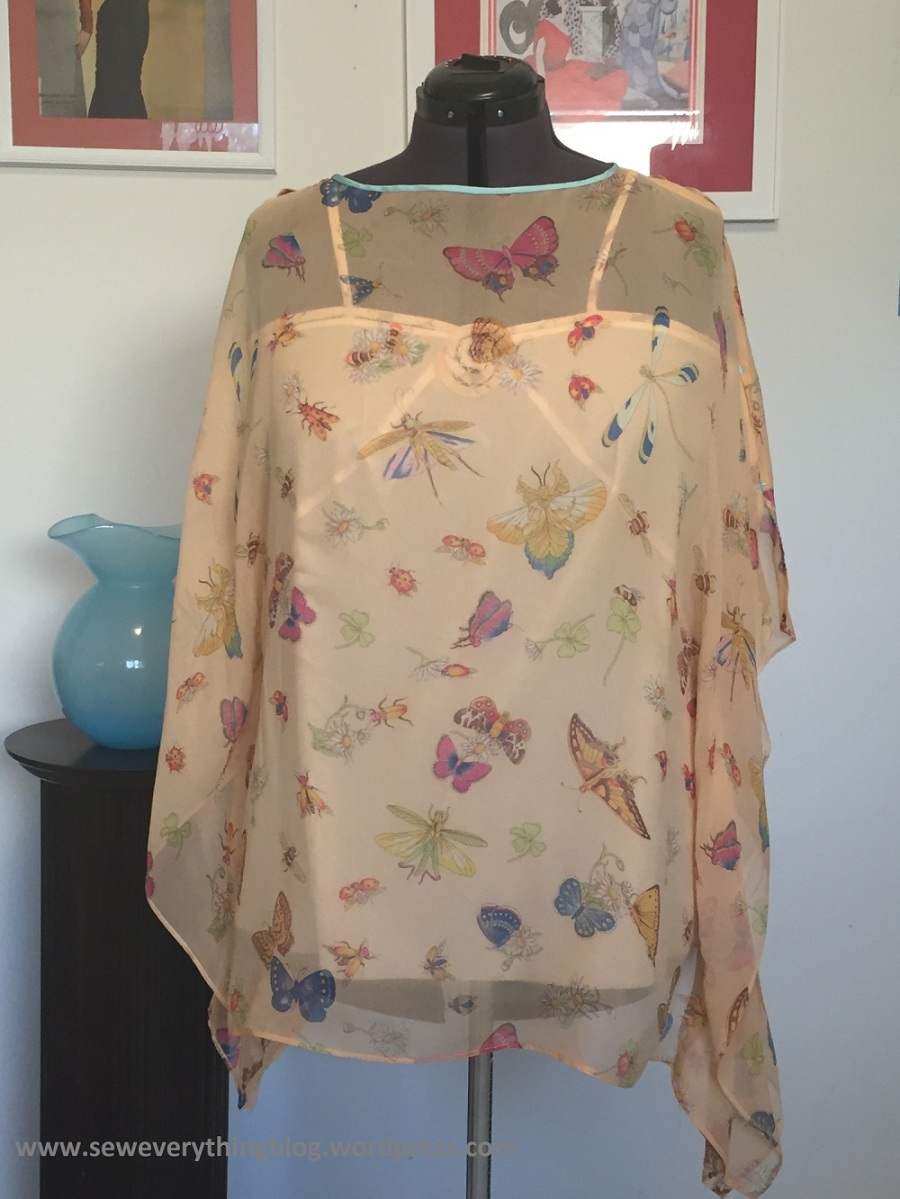 That is, until I heard it being exalted by my friend; then, I looked at it with new eyes and pulled out a long-stashed navy blue silk velvet to make another one; and another in a “rug” print rayon, more about which in a future post.

Psychology majors can explain it better but I guess we do dress for other people.  Or maybe, other people’s compliments verify one’s own sartorial judgement.  But let’s move on…..

If you start now, chances are you can wear this on New Years Eve.  This is a really quick top/tunic with four main seams, 5/8 inch hem all around and a bias bound neckline. The fitting is minimal. However, McCalls 6510 is best when sewn in drapey, slippery fabric – and therein lies the rub.  Fabric recommendations on the pattern envelope include georgette and silk crepe de chine, which are best sewn slowly, and with care.

Most important, my preferred version,  view A of this pattern has a very low neckline; if made as is, the neckline will expose some skin, and tend to skim off the shoulder.  Disregard this if that’s the look you want.

Once you’ve allotted time to make M6510, add at least 30 minutes for just laying out the fabric perfectly on grain – and you’d better be using paper underneath.

Double basting is a good idea, which I did in a previous bumpy velvet project. The blue velvet was not the bumpy kind, so I double pinned the seams and used a walking foot for some control.  Except the neckline; it’s best to baste the bias binding on the neck with diagonal basting stitches.

No direct pressing! Give it a steam iron hover and a finger press.

Hem: The wrong side shows when you move around; therefore, I preferred a wide bias faced hem rather than a 5/8 inch hem on this dressy fabric. A thinner, more casual fabric could have pulled off a smaller hem.  But we do make life difficult for ourselves, don’t we.  That’s fine, because I like my blue velvet.

Isn’t there a song called “She wore blue-e-e-e velvet”?

12 thoughts on “My Blue Velvet”