Merry Christmas!  Making Christmas cookies and the occasional Christmas craft project is my highlight of the holiday.  Technically, I do not celebrate, but that has not stopped me from loving all kinds of holiday themed cooking and crafts, and generally getting into the spirit! I try to bake a new holiday cookie each year. In 2015, these candy cane cookies with a peppermint flavor are “it”.

Today, I also want to share with you a Christmas issue of “The Delineator”, dated December 1930. The magazine was published by the Butterick Publishing Company (Butterick Patterns), who started the Delineator in 1873 (a few years after the American civil war), and in 1937 the magazine merged with The Pictorial Review. According to info in this 1930 issue, this is a re-vamped, modernized Delineator.

So, 1930; that was the year after the great crash of 1929. The economy was in dire straits, and many Americans were about to experience a severe economic low.  My curiosity took over; what do they publish which is of benefit to the reader in those trying times? Besides, fiction. There are tons of short stories and novel excerpts.  Well, there is not a whole lot of material which directly refers to the economic downturn, but it’s an interesting overview of American life then, or the American life which everyone was in pursuit of in 1930. I thought you might like a peek into the content.

I could not find any information about the cover artist inside – and it is a gorgeous cover. Women’s magazine covers of that era (and I own a few) pretty much all had illustrated covers, stylized to an extent but “fashion oriented”.

Some stodgy looking people are pictured on the group with Charlie Chaplin, silent movie superstar. Remember that “talkies” had taken off, and were being filmed since 1928 – just 2 years before this issue. Charlie Chaplin is visually the only “cool” guy in the photo. On the left is Konrad Bercovici who interviewed Chaplin for this issue. Flanking Chaplin are Count Karolyi (Hungarian) and Hugo Gelleri (a mystery since he appears nowhere in the magazine or the interview).  The caption does not identify these two gents – just names them.  The editor of the publication was Oscar Graeves who I tried to Google but found nothing. Call me crazy…. 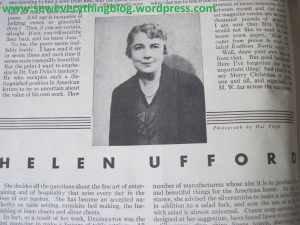 Then I found this nice lady, Helen Ufford, whose job title was the “Hostess Editor” of The Delineator. The job was created for her, as is sometimes done by today’s publishing houses.  Her job included guidance on what was then considered “woman’s work”. She was an authority on table settings, “exquisite bed making”, furnishing of linen closets and silver chests; she was also connecting with the manufacturers to give advice (which, I assume, was taken happily). Her work was also featured in advertisements.  Today, she would be called a STYLIST (food or decor).

The food articles seem to be promotions. A page on saving money on meat and associated with a product called Swift, gourmet sounding meals using Campbell’s soup. Then, a small feature on a pretty Christmas table setting (our friend Helen Ufford the stylist probably worked on this one) with a Christmas menu (which starts with red caviar, then goose with very fancy sides, and a delectable array of expensive sounding desserts). I think very few readers of The Delineator’s Christmas “number” could have been able to afford that menu in 1930.

On to the fashion content! There are illustrations and drawings of Butterick Patterns and a form for mail ordering them. There is no fashion editorial photography.  Enjoy the photos. There may be some of these out in the Ebay universe, if you collect them; in that sense I love these images as a reference.  I love the details; find the “cold shoulder” detail yet? 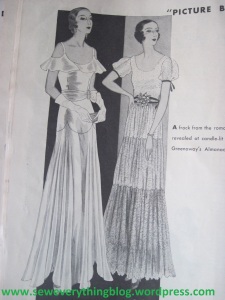 I love the ad for rain boots.  They’re pictured below with a background of coordinating fabric so the reader would know which boot to wear with what.  They look so modern, I thought they were everyday street footwear.  But they are rubber galoshes – very stylish. Do they look familiar? I own a similar pair in black leather. 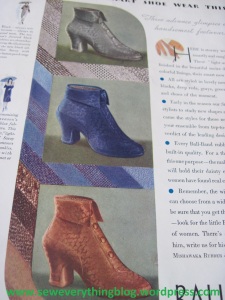 Just for your enjoyment, here are images of two Delineators I have in my “vintage magazine stash”.  One of the very early “numbers” dated 1895, and I apologize for the really bad photo;  the other is a cover only, and is dated November 1918, the year the Great War (WWI) ended. This cover illustration tells stories, I think. I own the cover only, found at an antique dealer. But the image is from this source since I could not take a picture of mine. The story about the fashions on this cover is very interesting reading. You can read it here.  Just a heads up; the uniforms are official Yeowoman’s Costume of the US Navy. 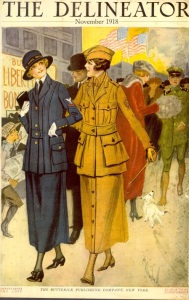 Merry Christmas and Everything Joyful to You and Yours.

4 thoughts on “Delving Into “The Delineator”, Christmas 1930 Number”