Its 80 degrees outside (hey, it’s February) and I am making progress with this prickly wool melton “Fling Thing”, so wonderfully named by the designer. And, I’m not enthralled.  It pains me to have an unfinished item in my possession but I have to put it away for now. It may make me happier after the embellishment, but right now, I don’t want to touch it. Ouch.

It’s the black wool melton included in the kit that turned me off. The yellow, red and blue are softer.  The black wool is like a heavy blanket – a heavy, prickly, uncomfortable blanket.  It’s probably meant for arctic conditions.  However, I did sew it up to this point, and am walking away for a while.

It’s much heavier than what we in moderate climes are used to sewing – what did I expect? Designer Linda MacPhee is Canadian. I have sewn nothing heavier than a lightweight, loosely woven tweed. This melton is irritating to the skin even over another garment, so I will choose the option of lining; it’s a partial lining – halfway down the back and fronts, and the sleeves. But the “flings” are unlined, and they will touch my neck when I fling them on the shoulders. Should I take the styling hint in the picture and wear it with a turtleneck, or cover my neck some other way?

I used a size 16 universal machine needle, and a 3 to 3.5 mm stitch length to make a lapped seam. There is only one pass of stitching in the lapped seam. Sewing another line next to it looks more finished, but some flexibility is lost – the seam, in my opinion, becomes stiffer with two rows of stitching.  But, is one row of stitching strong enough for this heavy fabric?

To avoid bulk, I considered other recommended seam options.  One of them was a butted seam.  Also thought about a “slot seam”.  Both options would need a strip of fabric underneath and more work; I became lazy and decided on the lapped seam.  These two interesting seam options deserve exploration in another project, though. 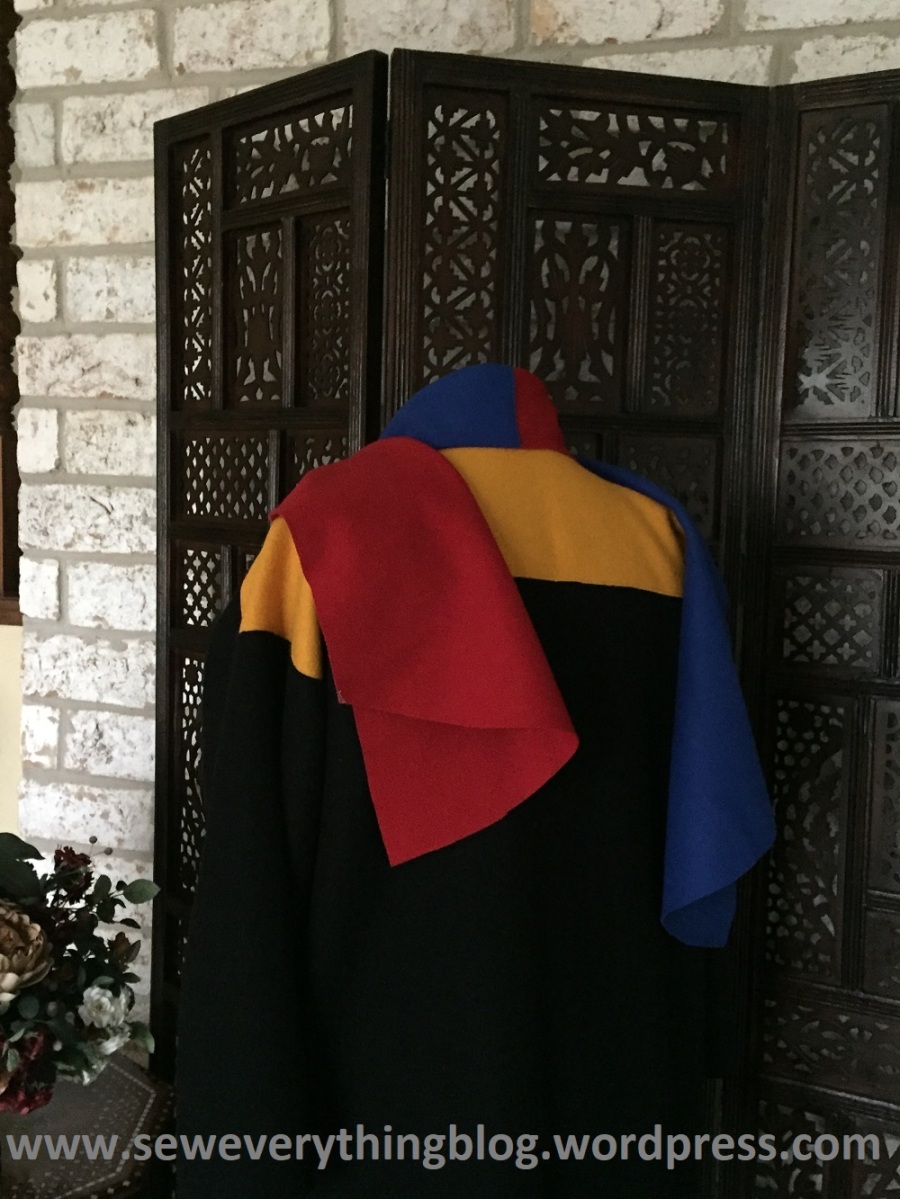 So far, I’ve decided to leave the edges and hems untouched by thread; maybe at a later date, I might use a blanket stitch all around.

Friends, I want to move on to some lighter weight sewing.  How does 11 oz rayon jersey sound?  I sent my jersey fairy over to Sew Much Fabric, and she unintentionally matched the color scheme of my prickly fling thing coat/topper.  Looking forward to sewing with primary colors of the jerseys!

Blogging note: I do my best to post on the blog every Tuesday morning at 7 am CST. Sometimes I can’t schedule a post due to actual, physical reasons. But yesterday, a disheartened sewing heart kept me away from finishing this post in time. See how an unsuccessful sewing project sends a seamstress into the doldrums? Took me a full day to bring myself to write this post and move on.

16 thoughts on “Fling Thing Progress: I’m Over it”