Hello, friends!  I’m back from my blogging hiatus, and  sharing this loud but happy top with you today. 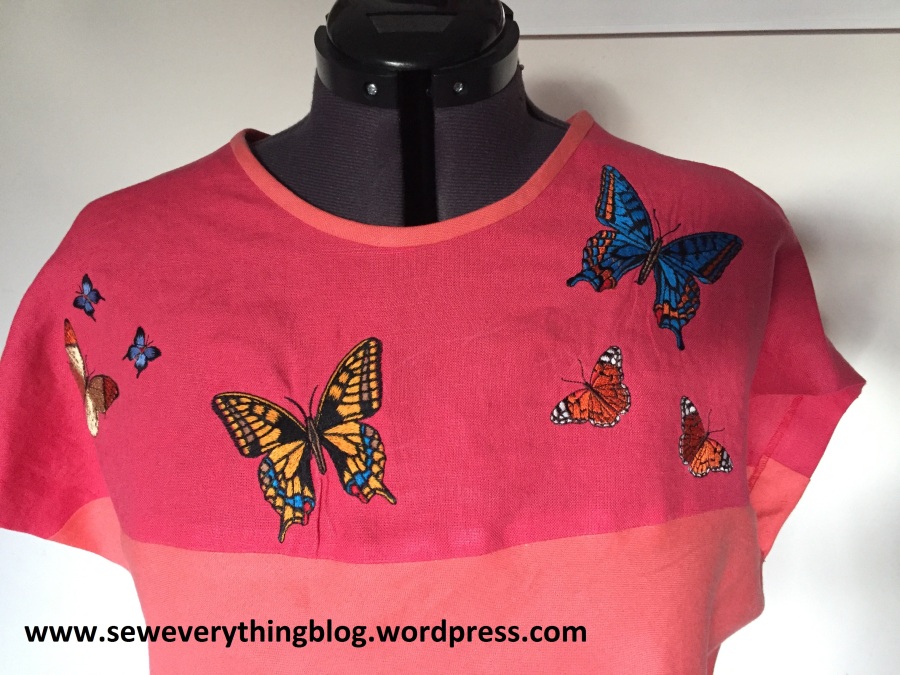 As a rule, I don’t participate in online sew-alongs and challenges, mainly because I can’t seem to sew fast enough to keep up with other participants; but this time I did. The Tops That Pop sew-along was headed by Linda Faye Lewis of the Faye’s Sewing Adventures blog for the last two weeks of April.  She has a Pinterest page dedicated to the Top sew-along where you can see all entries from the wonderful sewing enthusiasts who participated.

Well, April is earth month; and I gear my sewing activities to re-fashioning, upcycling and such. For the sew-along I decided to refashion my self-made (circa 2000 or so) bias dress, plus a leftover scrap of watermelon linen from a previous project, plus a much-hacked Colette Pattern; with some machine embroidered frenzy thrown in.

The pattern: I made the Sencha Blouse by Colette Patterns per instructions just once after I bought it. After that, this has been a prime candidate for changing around (hacking); out of the five times that I’ve use a hacked version, two have a contrast yoke (including this one), and three hacks with a shoulder seam and neckline re-design.

Original dress:  Just a note to say that the bias method is the same as written in my 2003 article for Threads magazine. Here I go, bragging again. Issue #107, if you subscribe.  The lower part of the dress was good for the bottom of the tunic; the hem was already done. I could have used the already-sewn side seams for the top, but had to open them up for proper laying out of the pattern. The side slit already there was also something I left in place.

The scrap:  Leftover from a linen drape-front jacket, the piece was just enough for the yoke. But wait, the top was starting to look like a large blob of bright fabric…..

The embroidery:  …. but machine embroidery came to the rescue. The only thing is, one, two or three butterflies just don’t cut it. So, in an embroidery stupor, I kept adding butterflies to the yoke.   Think of it this way –  it’s best to go big on embroidered butterflies;  what’s the point, otherwise?

Note the butterfly (or moth?) button :). It’s good to have a button stash.

So glad to be back writing posts for you.